Your Days Are Numbered!

The Paris attacks in which 130+ people have died, is fresh and alive in our memories. But what seems to be fading away is the Russian Jetliner that blew up mid-air and 224 people died.

In this hyper-connected world, each one of us is or may be affected with the scourge of terror. Awareness about how the terror can and will change the way we go about our daily lives, is important. This blog is an effort towards educating ourselves – and in spreading the awareness of methods being used by the terrorists. So what might have happened on this ill fated Russian plane and 224 people lost lives?  Read on  …

IS Downs Russian Jetliner
We are all aware of this big news – a Russian Jetliner that blew-up over Senai Peninsula on 31 October. Two days back, Russian president Putin announced that it was a mid-air bomb blast by a terrorist organisation. And well, Wilayat al Sinai, the IS arm in Senai peninsula has claimed the responsibility for it. The satellite images and the investigations so far indicate a Bomb Blast as the main cause of air crash.

Message in ‘Dabiq’
While the dust has not yet settled, here comes a media bomb from IS.  Last wednesday, IS made some chest-thumping claims in its online media  magazine – Dabiq. They have published a picture and given a write-up. 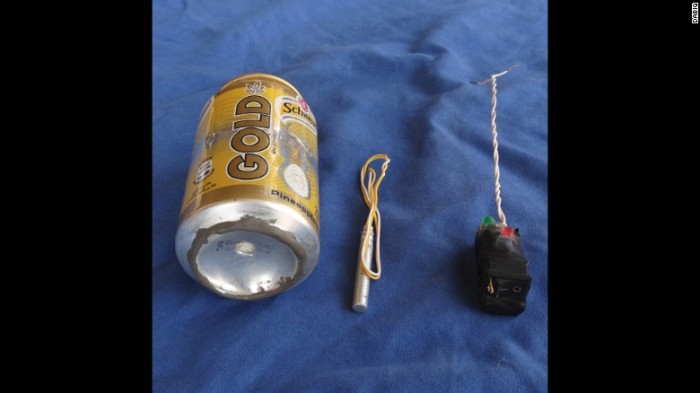 Picture
An ‘exclusive picture’ shows components of a crude improvised explosive device (IED), laid out on a blue cloth –  IS claims to have used an IED, assembled from these components to blow up the plane.

At the look of it – its a basic first generation IED used by not-so-tech-savvy insurgents or terrorists.

One may be wondering as to why they took this picture and published it? Well, they always record whatever they do for the on-line propaganda purposes and they are good at it – the be-heading videos et al.

Lets have a look at the image –

Schweppes Gold Soda Can. An aluminium soda can is something that catering staff, in all the airlines, would load as part of their food inventory.  One can see a small circular hole at the bottom – through it – a white substance which is probably explosive – and it is a solid explosive like TNT or Plastic.

The circular hole at bottom is to insert the detonator (the thing in the centre of the image).

Third thing you see on the can, is a circular grey coloured sealant at the bottom. In order to fill explosive in the can, they have cut open the lid, tamped in about 1 kg explosive and then put the lid back.  An M-seal type of sealant has then been applied to seal the lid.

Electric Detonator. This in the item you see at centre of image, and is a thin cylindrical aluminium tube which has sensitive explosive and two wire leads. A detonator is initiated with an electric pulse – from a battery power source. It looks like a commercial detonator; and its production is always controlled, thus theoretically making it possible to trace back the origin.

Battery and Switch.  The third and rightmost item in the image, is covered in tape and not much is visible. What one can see is a pair of wire terminal,  a common on-off switch and red & green LEDs. For this explosive device to work – you need a battery, a timer device and an on-off switch. This is what seems to have been bundled and taped together here.

Here is another relevant message in the Dabiq article. IS has bragged about their modus operandi –

“…. And so after having discovered a way to compromise the security at the Sharm el-Sheikh International Airport and resolving to bring down a plane belonging to a nation in the American-led Western coalition against the Islamic State, the target was changed to a Russian plane …”

Probable Scenario
Let me paint a picture of what could have happened. This is based on all the knowledge in the public domain and an assumption that the bomb in the picture above was actually used  –

Step 1 – IS local operatives found a security loophole in Sharm-al-Sheikh airport procedures. This loophole could be – the catering staff who help load the food items or the clean-up guys who enter, clean up and leave the craft. Both these are the employees who have an access to the aircraft before the passengers come in and are normally not suspected or put through the stringent security checks.

Step 2 – IS found one person who can carry the bomb and place it in the plane. This person could be a member of  facility management or the catering staff or even a mole in the security set-up. He could be a planted IS operative, a sympathiser, a bribed or even coerced (kidnapping family members etc).

Step 3 – So now you know a security gap and have a person to carry the device. IS local operator, will now assemble the explosive device from the components shown above, may be in his car outside the airport. Switch on the timing device to explode in say 2 hours, and hand it over to the resource person at a designated time and place.

Step 4 – The Schweppes Soda Can device is now unassumingly placed under a seat or in the pantry enclosure – and the person leaves the plane. It is now ticking to explode in 2 hours.  As the plane takes off – 27 minutes in flight the bomb goes off, punching a hole in the rear of the plane.

Step 5 – The pressure differential inside and outside the plane – and a hole made by a 2 pound explosive device – is theoretically enough to rip and blast the plane in the mid-air. This is what probably happened.

Learnings
There are  lessons to carry, and here are some –

a. YES, It is possible to blow a jetliner with a crude 2 lbs bomb. The pressure differential mid-air multiplies the effect of a small 2 lbs bomb explosion. On the runway such a device might jut blow a 3 ft hole in the plane and blast 3 rows of seats.

b. YES, It is possible to find or coerce a sympathiser who is aware of the procedural loophole, can easily hoodwink the security system and place a timer- activated- bomb in the plane.

c. The security system is currently focused on an assumption that a passenger traveler will try to sneak-in the bomb material – and explode it inside the plane. This thinking needs to change and extend to all humans who come to the plane.

d. The ground staff personnel approach the plane before the passengers comes in – cleaning staff, fueling staff, cargo staff and catering staff – they all have trusted access to the plane. Among them IS probably found a human carrier of their Time-Bomb. Need to keep a vigil of a personality type who could be a sympathiser or has a recently changed behaviour.

e. Is there a possibility of this bomb to be placed in check-in luggage?
Well, anything is possible. The ‘TNT filled metal can’ and the electric wire terminals of detonator and switch – are difficult to conceal – and would have got noticed in an x-ray machine. But if you have an insider helping out – this possibility cannot be ruled out.

Real Threat
This person within an organisation who knows the weaknesses of the system and is compromised by indoctrination or coercion is the real threat.

And let me say it loud and clear that YES- a simple 2 pound soda-can-bomb can kill 224 persons by blowing up a jetliner mid-air.  IS seems to have extracted a revenge on Superpower Russia for bombing the IS territory – with very little effort.

Anything can happen anywhere, anytime? Common man remains perpetually vulnerable to such inhuman acts. This fear and insecurity is the new challenge in our everyday  lives. Let us be vigilant then!

8 thoughts on “IS Blew-up Russian Jetliner by a 2 Pound Bomb – You Must be Joking!”